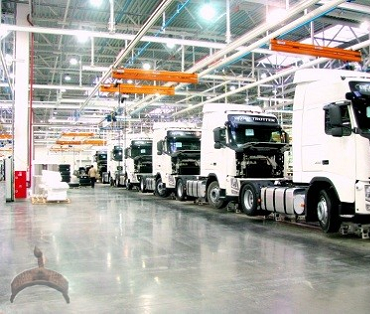 BACKGROUND AND CORPORATE STATUS OF ANAMMCO

Anambra Motor Manufacturing Company Limited (“ANAMMCO” or “the Company”) was incorporated in 1977 as a private limited liability company. It was established pursuant to a Joint Venture Agreement between the Federal Government of Nigeria (FGN) and the then Daimler-Benz AG of Germany, now Daimler Chrysler AG of Germany, as the Technical Partner.

The agreement was for the establishment of an assembly/manufacturing plant in Nigeria for the production and marketing of Mercedes Benz brands of Trucks and Buses of varying models and capacities. This agreement granted protection to the company through import restriction and expected the company to pursue a programme of gradual phase-out of imported parts until the vehicles are assembled with 100% local content by 1991. Located on approximately 300,000 square- meter -site at Emene Industrial Layout, Emene in the outskirts of Enugu town in Enugu State,

ANAMMCO is a corporate entity duly registered under the laws of the Federal Republic of Nigeria as a Private Limited Liability Company on January 17, 1977 with RC. No. 20,106. This was sequel to the Joint Venture Agreement of December 12, 1975 between the Federal Military Government of Nigeria and the Technical Partners Daimler-Benz A.G now Daimler-Chrysler A.G. on December 12, 1975.

The company was incorporated to carry on the business of manufacturing, assembly, importation and sale of CKD sets for Mercedes Benz commercial vehicles, agricultural tractors and passenger cars as well as spare parts. The Memorandum and Article of association of the company empowers it to carry out the series of agreements entered into on the establishment of the Commercial Vehicle Assembly/Manufacturing Plant under “The Joint Venture, Manufacturing and Agency Agreements”.

The plant, which was commissioned on July 8, 1980, has an installed capacity to assemble 7,500 trucks per annum, on a single shift basis. The plant was originally designed to engage in the assembly of Mercedes Benz commercial trucks with payloads of 2.5 tons and above.  However actual production started with the assembly of vehicles with payloads of 5 tons and above. Production started in 1980 with two basic models – L911 & LS 1924. By the end of the year they produced a total of 795 vehicles. Presently the models of trucks produced are:

The Company provides spare parts and also engages in the repair of vehicles. The company does not engage in component manufacture, but engages in contract manufacture for its restricted distributors. Daimler Chrysler AG, the technical partners, together with Daimler Chrysler supply Mercedes-Benz spare parts and Completely Knocked Down (CKD) sets to the Company. ANAMMCO has a central spares parts supply depot.

Though these models adequately fit into, and satisfy, most of the country’s need for light and Medium truck ranges, the heavy market segment has remained open in the country with the importation of fairly used heavy trucks of all makes and ages creating problems for the company.

4- year sales by brand is given below

Sales are carried out through 3 distributors and 10 authorized agents. Sales operations have been directed mainly at the public sector and few private companies. Sales to third parties are through the distributors and agents.  ANAMMCO also has an agency agreement with its parent company to import and sell Fully Built Units (FUBs) in Nigerian territorial market. ANAMMCO maintains a dominant position in the fully built luxury bus market, controlling approximately 70% market share, averaging between 150 to 200 buses annually. These imported vehicles provide a live line for the company. The marketing strategy of the company is sub regionally focused because the company’s major customers are located in the eastern parts of Nigeria.

Shareholding of the Company

The planned strategy for privatizing the company is by selling FGN shares to an institutional investor who would be able to add value to the operations of the company.

The need to meet up with competition for trucks and new opportunities necessitated the diversification to buses and utility vehicles such as trailers, tankers etc. The company, despite the current recession in the sector, has a capacity to produce about 750-800 trucks and buses annually.   Since inception the company has produced over 40,000 vehicles.

The company has well-established models of buses that have permeated the Nigerian market as follows:

Apart from trucks and buses, the company has also diversified into production of special utility vehicles such as:

The future of the bus and truck business in Nigeria is very bright. This is because there is an established market for the different products of ANAMMCO as 90% of the movement of goods/services and people is done through road transport in the country.

The customers of the products and services of the company are numerous and are as follows:

The following forecast is for the Africa bus project, which was planned by the company. They plan to begin serial production of MBO 1721 city /inter city buses and heavy-duty LS 2031 trucks. The MBO 1721 bus is a 52-seater bus, which is suitable for both city and intercity transportation.  The company imported and sold many units of the two products built to test the market. The table below shows the sales figures for the past three years

It is however expected that with local production of the two types of vehicles the unit prices will be drastically reduced, resulting in increase in the demand and sales of the new product.  This   expectation is informed by the inherent advantage of local production over FBU import because:

Sales forecast for the two products is as follows

As the representative of Daimler- Chrysler AG in Nigeria, MB – ANAMMCO brings Mercedes Benz technology and know-how to Nigeria while at the same time creating over 600 direct employment opportunities for Nigerian. The contribution of MB – ANAMMCO to the economic development of Nigeria cannot be over emphasized. The company has continued to maintain a high level of resilience in its attempt to survive the harsh economic climate and live up to the confidence reposed in it as an affiliate of the most historical, traditional and successful automotive company in the world.